“Unusual” numbers about Vietnam’s exports: what have Delta variants done? 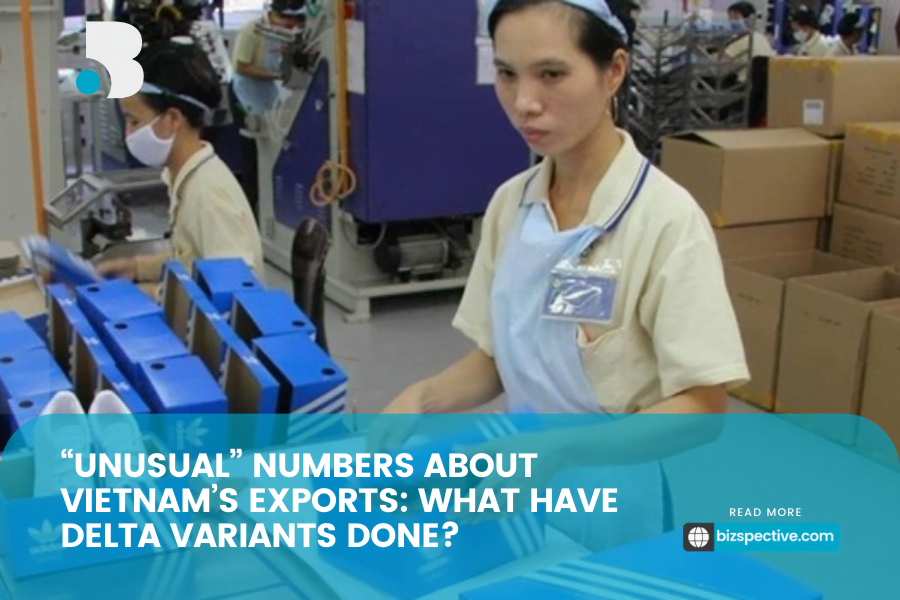 HSBC bank report emphasized that the Covid-19 pandemic’s impact on Vietnam’s exports may seem unusual at first, but the root cause lies in the geographical distribution of the electronics industry zone.

The September periodic report released by HSBC has shown that the economic figures in August clearly reflect the stagnation in Vietnam’s economic recovery, especially the severe supply chain disruption in the Southeast region.

Personal consumption in the country is heavily affected when the restricted lockdown orders get applied in most parts. These result in a 40% decline in the retail industry compared to the same period last year. Particularly in Ho Chi Minh City, where the lockdown orders were prolonged, retail sales decreased by 51% over the same period in 2020.

The report assesses “But what is more alarming is that the external development momentum has slowed down. For the first time in a year, exports have suffered a serious decline, while some industries have experienced supply chain disruptions and production disruption”. HSBC said that the cause mainly lies in the footwear and textile industries because Vietnam’s Southeast region is an important production hub of the world. These two industries are the main reasons why August exports fell by 5.4% over the same period in 2020.

The market shares of Vietnam’s footwear industry in the world are currently accounting for 15%, doubling in the past 10 years. As the holiday season approaches in Western countries, consumers in the US and Europe will see the impact of the pandemic more clearly.

Look at Nike for example 88 of Nike’s 112 factories in Vietnam are located in the Southeast region, responsible for producing 50% of the brand’s footwear product. This can indicate that Vietnam plays a crucial role in the world’s supply chain.

Moreover, Vietnam is also among the world’s largest textile and garment-producing countries, just behind China and Bangladesh. Severe supply disruptions could hit consumers hard in the US, where alone consumes nearly half of Vietnam’s clothing exports. International brand Adidas is also facing a shortage of products as Vietnam accounts for nearly 30% of its global output.

Surprisingly, electronics exports still have a positive result. Like footwear and textiles, exports of computers and electronic products decreased by 12% in August compared to the same period last year. In contrast, phone exports remained stable with a growth rate of 11% over the same period.

The true reason lies in the geographical distribution of factories

The root cause for these unusual numbers about Vietnam’s export is the geographical distribution of electronics industry clusters. Samsung, Vietnam’s largest independent investor, manufactures smartphones at two factories located in the North, one in Bac Ninh and one in Thai Nguyen. After the first COVID-19 Delta variant outbreak in May, industrial areas have gradually returned to normal operations.

On a broader scale, the Delta variant outbreak has raised many questions about the viability of the Vietnamese supply chain, especially from the tech giant’s views. Apple and Google are two of those that have delayed moving their supply chains to Vietnam.

The report stated “However, despite the possible struggles, in our view, Vietnam still remains an attractive destination for investors in the near future. Vietnam’s strong foundation will help investors ignore the short-term fluctuations due to Covid-19.”

Samsung is preparing to expand its phone factory in the second half of this year to increase production of foldable phones by 47% to 25 million units.

Meanwhile, LG Display has also just approved an additional investment of 1.4 billion USD for a factory in Hai Phong to increase the output of OLED screens per month from 9.6 – 10 million to 13 – 14 million units.

According to HSBC, the recovery plan that Vietnam’s Government is aiming for depends largely on the ability to achieve a high vaccine coverage rate. Despite positive progress, Vietnam is still behind neighboring countries in ordering and deploying vaccines.

The report concluded, “The sooner the fourth Covid-19 outbreak is under control, the more confidence Vietnam will regain from foreign investors, and the main part of this equation is accelerating vaccination deployment”.